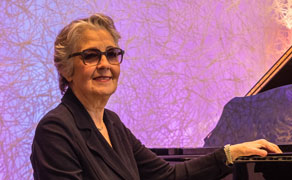 Tatyana Geringas comes from a Moscow musician family. At the age of five, she received her first piano lessons from her father, Neuhaus’ pupil. At the age of 18 she performed the A-Major Piano Concerto by Mozart for the first time (the concert was broadcast on TV). She was then taken to the Prof. Heinrich Neuhaus’ master class at the Tchaikovsky Conservatory. After the passing of the famous teacher, she continued her studies with his son Stanislav Neuhaus at the Moscow Conservatory. With David Geringas, whom she met during this time, she often played for Mstislav Rostropovich, studying numerous works with him. Playing in duo became her great passion. In 1970, David and Tatyana Geringas debuted in the Great Hall of the Moscow Conservatory, and then numerous concerts in the whole Soviet Union as well as radio, television and record recordings followed. She taught at the Academic Music College at the Tchaikovsky Conservatory in Moscow, the oldest music college in Moscow, founded in 1891. After Tatyana moved to Germany, the much-respected debut took place at the Ludwigsburger Schlossfestspiele and the Berliner Philharmonie in 1977. Since then, she has been playing highly praised recitals with David Geringas in the great concert halls on all five continents, and they are among the world’s first guards of the formation cello and piano. Together with Prof. David Geringas, she taught the new generation of international Cello-elite, accompanied them at international competitions. She received high praise from Mstislav Rostropovich, Pierre Fournier, Isaak Stern, Raya Garbousova, Leonard Rose and Antonio Janigro. As a professor at the Musikhochschule Lübeck, she often represented Prof. David Geringas. In Japan, she held several years of piano master classes at the Aspen Festival in Kanazawa. At the famous Scuola Musica Fiesole in Italy, she led a joint class with Prof. David Geringas for seven years. Numerous composers have dedicated works to Tatyana: Kzsystof Meyer, Viktor Suslin, Erkki-Sven Tüür, Friedhelm Döhl, Anatolijus Senderovas, Vytautas Barkauskas, Osvaldas Balakauskas and others. For the complete recording of the works by Alfred Schnittke, she received the prize of the “Schallplattenkritik” together with David Geringas. The works of Schubert, Schumann, Brahms, Richard Strauss and Schulhof were released by “Es-Dur” label. Tatjana Geringas was the first performer of Double concerto for cello, clavinova, chorus and orchestra by Anatolijus Senderovas in Vilnius under the direction of Robertas Shervenikas and “Blissful Music” (1997) for violoncello, piano and orchestra by Alexander Raskatov in Seattle under the direction of Dmitry Sitkovetsky.