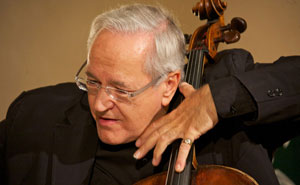 A pupil of Rostropovich and gold-medal winner at the 1970 Tchaikovsky Competition, David Geringas can now look back on a career that has spanned decades. His discography, which now features almost one hundred CDs, includes many that have been honoured with prestigious prizes including the Grand Prix du Disque, the Diapason d’Or and the Preis der Deutschen Schallplattenkritik. In 2013 David Geringas received the Echo Klassik award for the best chamber music recording of works from the 20th-21st centuries and in 2014 for the best chamber music recording of works from the 19th century. One important facet of his career as a performer has been the release of outstanding CDs. Between 2008 and 2011 eight new CDs were released. Among them are two world-premieres (David’s Song and Discorsi), works for piano and cello by Rachmaninoff, Mendelssohn and Chopin as well as the complete works for cello and piano by Beethoven with the pianist Ian Fountain – a recording which was named “Editor’s Choice” by Gramophone magazine. The CD of the cycle Bach Plus that includes all six Bach Suites for Cello and highlights by various contemporary composers was released in October 2011. Well-known contemporary composers such as Sofia Gubaidulina, Ned Rorem, Pēteris Vasks and Erkki-Sven Tüür have dedicated cello concerti to him. In 2012 David Geringas performed three world premieres – Arvydas Malcys’ concerto In Memoriam in Kaunas, the Concerto per Violoncello by Silvia Colasanti in Milan and the Cello Concerto by Alexander Raskatov in Amsterdam. As a conductor, David Geringas performs regularly internationally and appears frequently in the dual role of cellist and conductor. From 2005 to 2008 he was Principal Guest Conductor of the Kyushu Philharmonic Orchestra and in 2007 he made his debuts with the Tokyo Philharmonic Orchestra und the China Philharmonic Orchestra. In February 2009 he made his debut as a conductor with the Moscow Philharmonic in Moscow and in 2015 with the Mariinsky Orchestra in St Petersburg. His opera conducting debut followed in 2010 with Tchaikovsky’s Eugene Onegin in Klaipeda (Lithuania). In 2015 David Geringas made his acclaimed debut as a music director and conductor of the ballet Eglė, the Queen of Grass Snakes by Eduardas Balsys in Vilnius. For decades David Geringas has taught a world-famous cello class which has produced such cello stars as Gustav Rivinius, Jens-Peter Maintz, Wolfgang Emanuel Schmidt, Monika Leskovar, Tatjana Vassiljeva, Jing Zhao, Johannes Moser, Maximilian Hornung and Sol Gabetta. For his championing of Lithuanian music and composers, David Geringas has won the highest awards of his homeland. He was awarded the Verdienstkreuz (1st class) by Germany. David Geringas is honorary professor at the Moscow Conservatoire and at the Central Conservatory in Beijing, as well as having received an honorary doctorate from the Lithuanian Music and Theatre Academy. In the winter term of 2014–2015 David Geringas was a guest professor at the University of Southern California in Los Angeles and at the Manhattan School of Music in New York.